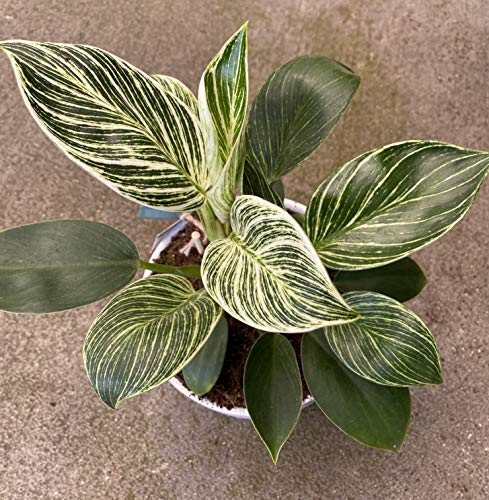 Read on below to learn how to best take care of your Philodendron Birkin to guarantee its long and healthy life in your home.

What Is A Philodendron Birkin

The Philodendron Birkin is a beautiful houseplant, recognized by its dark green waxy leaves, with light yellow and white stripes. It’s part of the Araceae plant family and a tropical plant, who wants to maintain its warm and humid environment in your home.

It is estimated that at its maturity (which can take around 10 years!), a Philodendron Birkin can reach several feet in height and spread out to around 2 feet. In general, you will mostly see smaller Philodendron Birkins as it does take a long time to reach maturity; therefore you will generally see them around 1.5-3ft tall.

What makes the Philodendron Birkin so unique and unpredictable is that its variegation, or the appearance of different colors in leaves, is unstable. Due to the accidental origin of this variety of Philodendron, the Birkin’s leaves are not uniform in shape and color and cannot be confidently predicted. The typical variegations that appear with Philodendron Birkin are light yellow or white and these can be in stripes, full leaves, or half-moon color zones. It is possible that no one leaf on the Birkin will appear with the same variegation. 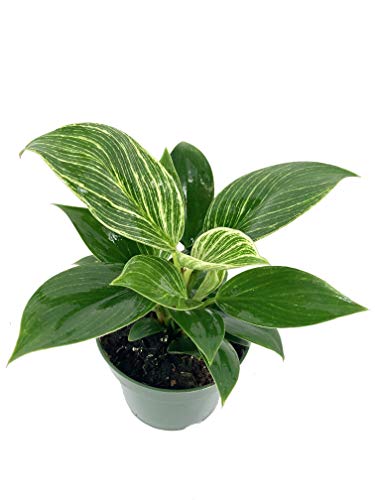 The Philodendron Birkin likes to mimic its natural tropical environment, preferring bright indirect light. If your Birkin is exposed to too much or direct light, the leaves will fall off and the plant will dry up and/or wilt.

On the other hand, too much shade is not good and can cause the stems to sag and even cause the plant to die.

In terms of natural lighting, indoors it is best to place your Philodendron in an East or West facing window for the best lighting. If you are using artificial light, grow lights can be used to aid in the Philodendron Birkin’s growth. When using grow lights, limit its use to 12 hours during the day. Grow lights are most beneficial during the winter to combat colder temperatures, but used during other seasons will allow for additional growth.

Place a finger in the soil and the soil that is touching your first knuckle and above (around one inch) should be dry before you consider watering. If, when you pull your finger out, there is soil on your finger, that indicates that you do not need to water your Philodendron Birkin yet as it is moist enough.

The soil you use for your Philodendron Birkin houseplant should be loose soil, but not too loose. You want the soil to be able to retain water, as the Birkin is not considered to be drought tolerant. The soil should also be able to drain excess water that the Philodendron does not need in order to avoid root rot.

Possible soil options are sphagnum peat moss or a mix of perlite and potting mix. Using sphagnum peat moss allows the coarse and air properties of the moss to allow the medium to retain water, but allow the excess to drain. A 1:3 ratio of perlite to potting mix is another good option. The perlite helps with creating an airy quality to the soil, necessary for drainage properties.

When selecting the size of the pot to move your Philodendron Birkin into, be sure to select a pot that is not too much larger than the plant. While it may seem frugal to get a larger pot that you Birkin can settle into for several years if there is too much room it will cause your plant stress.

Because the Philodendron Birkin’s natural environment is tropical, you will want to replicate as much as possible for your houseplant. Keep it warm and humid!

In addition to consistent warmth, Philodendron Birkin loves humidity, so you will want to try to mimic that environment by keeping the room between 40-70% humidity. While the Birkin can survive through light humidity, it will grow larger and healthier if it is provided the appropriate amount of humidity.

Philodendron Birkins should be fertilized around once every week to once every two weeks. Select a liquid fertilizer with micronutrients calcium and magnesium. These nutrients are the most nutritious for any Philodendron plant. During the winter months, the plant does not need to be fertilized as frequently; once a month should be sufficient for winter fertilizing.

Not much is necessary for the pruning of your Philodendron Birkin. Occasionally using garden shears (not scissors), remove any dead or damaged leaves from the plant.

There are two main methods for successful propagation, both through stem cuttings. You will want to wait to propagate your Philodendron Birkin until the months of March and April.

First, you will cut the stem right below the leaf node. Look for a stem that is around 3-6 inches long – the longer the stem, the better.

Next, you will fill a container with water, leaving space at the top. Let the water sit overnight so that any minerals can settle at the bottom. Place the stems so that the bare nodes are just sitting in the water.

Change the water every day and in about 1 week, roots should start to grow out of the node. Once you see the roots, move the container into bright indirect light. The stem and roots should remain in the water until the roots are about 1 inch long.

Once the roots are long enough, you can move your stem into a new pot to grow in a Philodendron Birkin-friendly soil mix

Another method also involves stems, but not actually removing them from the parent plant until you re-pot it.

First, create a 2 inch cut on the stem of the Philodendron Birkin. Use a toothpick or a similar small tool to hold open the cut. Take a handful of damp sphagnum moss and put it around the cut. Tie a string around the moss to keep it attached near the cut and wrap it with film tightly. Ensure that the moss remains moist for the entirety of this process.

After 2 weeks, roots should begin to grow out of the cut in the moss. You can now remove the stem from the parent plant, cutting right below the moss. Remove the film and now plant the stem, moss, and roots into a Philodendron Birkin-friendly soil mix.

Common Problems In Caring For An Philodendron Birkin

Philodendron Birkin is known to be fairly pest-resistant. As with all houseplants, watch for spider mites and mealybugs. You can avoid this by paying attention to the leaves and cleaning them periodically.

If you find that the leaves of your Philodendron Birkin are yellowing, that is likely a sign of overwatering. Be sure to check the soil moisture more carefully before you water. If you do not change your watering habits, more leaves will yellow, there will be root rot and your Birkin will die.

Curling leaves are signs of many different issues with a Philodendron Birkin.

Two possibilities deal with watering. If your leaves curl it can be a sign of underwatering or overwatering. If you notice this issue, reassess your watering habits. Check the top inch of the soil to note if it is dry or moist. If it is dry, continue investigating further down in the soil. If the soil remains dry as you continue down, it is underwatered. If it is moist within the top inch it might be over watered.

If it is underwatered, do not shock the plant by drowning it in water. You will need to slowly introduce water, by watering the Philodendron Birkin in smaller amounts more frequently until it is acclimatized to being watered.

If it is overwatered, begin by watering less frequently or a smaller volume of water. If it is still an issue, consider repotting and changing the soil medium.

Because the Philodendron Birkin is native to the tropics, if continually exposed to cool temperatures, its leaves may curl. Consider moving the location of your plant in the house away from windows, nearer to heating vents or grow lights, whatever you can do to increase its temperature.

Along the same lines, Philodendron Birkin likes to have humidity like the topics. If there is too little or no humidity in the air, its leaves will begin to curl. You can counteract this issue by misting the leaves, using a humidifier, change its location in the room or home, or shower it with lukewarm water.

How to Care for Calathea Ornata (Pinstripe Plant)

How to Care for Alocasia Black Velvet (Alocasia Reginula)

How to Care for Syngonium Berry Allusion

Receive a 10% off coupon code to our store.

You have Successfully Subscribed!